Following a three-month study sponsored by UI-Path during the first quarter of 2021, over 1,000 digital leaders from 35 countries came together at a CIONEXT global event to discuss reinvention of business and redesign of work. We summarise here the panel discussion that took place in response to the study findings.

A confluence of change factors has been coming together for some years to encourage reinvention amongst incumbent organisations. However, in many cases, these remained at the discussion stage until the pandemic broke in early 2020. The combination of these change factors and the pandemic has caused a fundamental shift in corporate mindset enabling rapid decisions to be made and a decade of digital development to be compressed into just twelve months.

The change factors include:

During 2020 businesses and government organisations had to learn swiftly to cope with distributed working and ‘online everything’ as consumers and workers were confined to their homes for several months. The availability of public cloud services and related software tools such as Zoom enabled a rapid transition to home working. However, the disruption caused by COVID brought many corporate projects to a stand-still. Most organisations chose to focus their investments on the customer experience rather than back-office modernisation.

Automation rose to the top of many corporate agendas as the need for speed and agility became paramount, especially in dealing with the exponential rise in digital customer channels and related transactions. Distributed working also encouraged different approaches to change management relying heavily on collaborative tools such as Yammer. 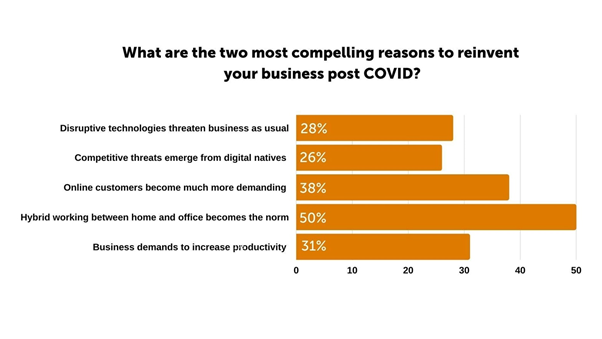 How to redesign work?

The study examined work under three headings: workflow automation, workforce transformation and workplace modernisation. Here is a summary of the panel discussions on these three related topics.

In parallel to these initiatives, many organisations have embarked on ambitious ‘citizen development’ programmes to encourage staff within the businesses to work closely with IT to co-develop automated solutions. In this respect, panelists agreed that traditional boundaries between business and IT were blurring. For those adopting digital business models such as PKO, IT has become the business. 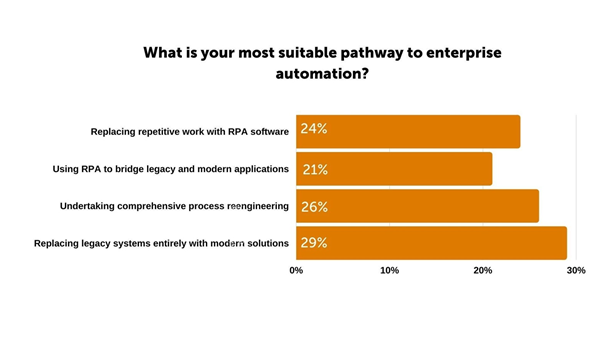 2. Workforce Transformation
- given the acceleration in the rate of change provoked by a global pandemic, management styles and leadership approaches have evolved accordingly. Within IT itself CIOs recognise that business knowledge and experience is a prerequisite for a position within the ‘C’ suite. Equally, every effort today is being focused on attracting and retaining digital skills. Traditional hierarchies are giving way to flatter structures which require an emphasis on orchestration and collaboration rather than command and control.

Sourcing of digital talent is a major challenge as all sectors gear up to reinvent their businesses. Trends discussed within the panel included:

Of particular interest at CIO level is the globalisation of talent sourcing. Many European companies are hiring top executives from the USA and visa-versa. This has led to further ‘virtualisation’ of organisational structures and lines of command. Equally, project teams are now more dispersed in their structures, able to employ virtual working for major projects. 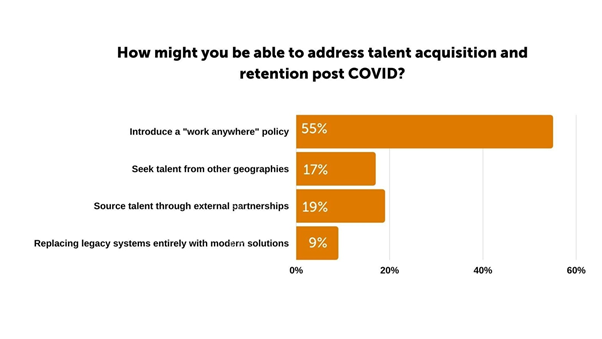 3. Workplace modernisation– the sudden move to home working for over a billion employees in early 2020 will have a lasting and disruptive effect on where and how we work. Any return to the ‘office’ will need to be accompanied by a rethink of how much space is needed and how it can best be utilised. Not since the advent of ‘shell and core’ building design in the eighties has the real estate business been so challenged to develop new design concepts.

Members of the panel were embarking on a range of different workplace options that included:

In all cases, technologies such as IoT, 5G and video will be critical for a more flexible and agile way of working with many staff choosing to spend 50% of their time at home. The biggest challenge here is to create a ‘level playing Field’ between home and office workers. Frictionless communication will be a pre-requisite for the ‘office of the Future’.

Again, much discussion on office design and local experimentation has taken place since the start of the millennium. However, the pandemic has accelerated developments and posed a fundamental challenge to real estate operators, especially in city centres. 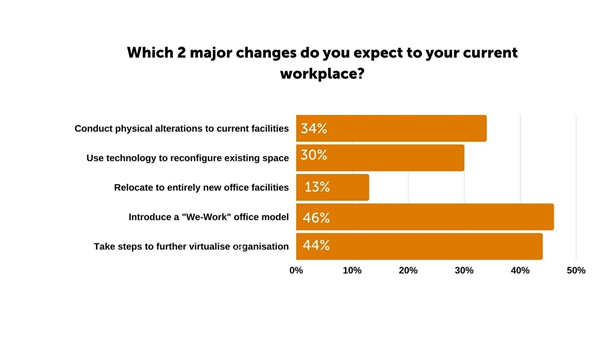 A future role for IT

The many changes taking place across organisations has prompted CIOs to think about their own roles as we enter the digital era. The panel recognises that low-code and no-code will accelerate citizen’s development within business units. They also recognise the need to create a solid foundation on which to support such developments. One panelist described his role as an integrator, bringing together a consistent set of development tools, protecting all data assets, and ensuring security against cyber attacks. In this sense, IT becomes the secure and agile development platform for automation and digital transformation.