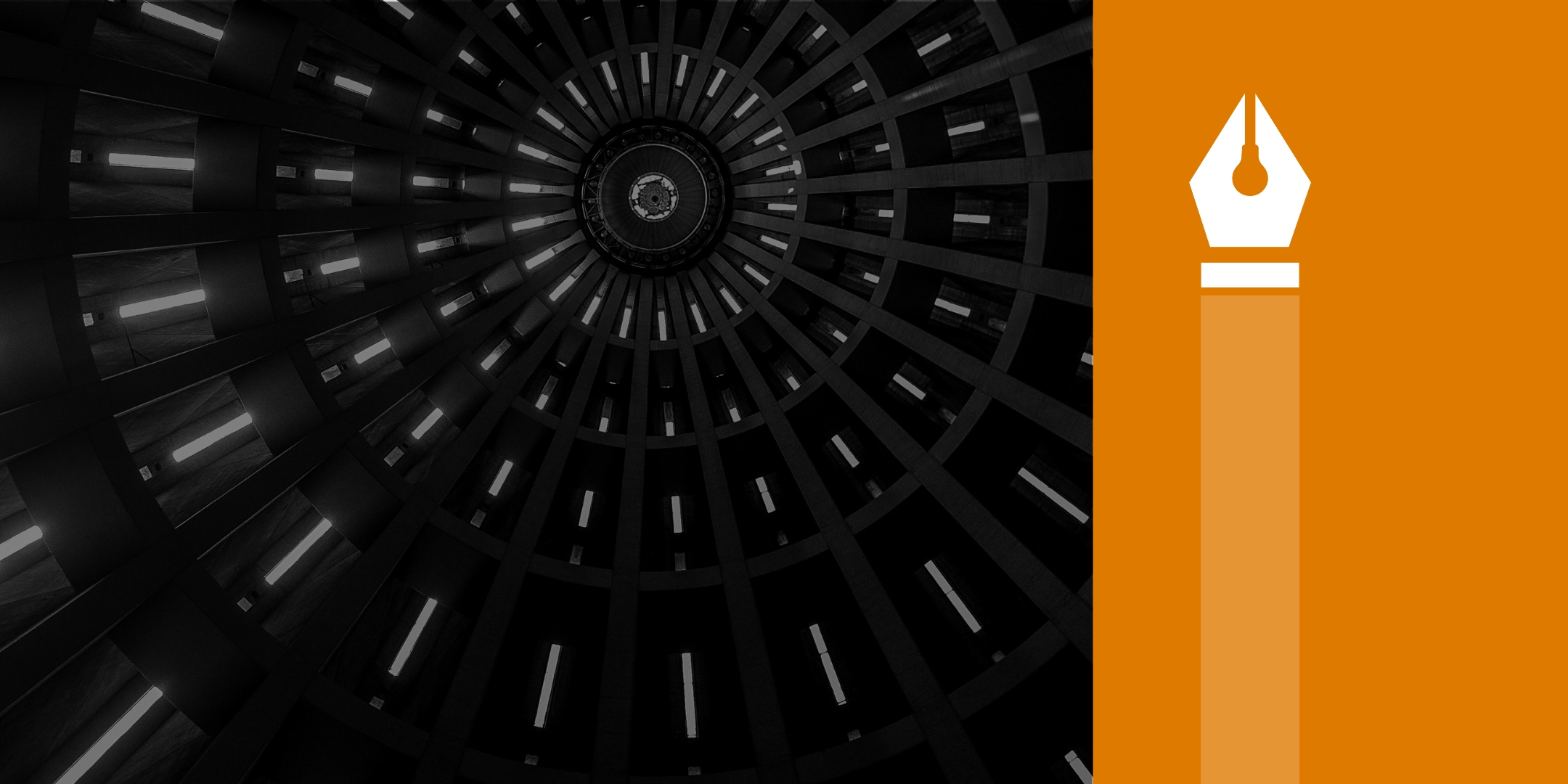 Following the agile and lean movements of the last decades, matrix structures have become increasingly popular in companies today. However, whilst scaling this structure in width and length has become easier, many organisations still wonder how to apply the benefits from the matrix to organisational hierarchies, and how to manage the difficult split between flat organisational structures and some necessary hierarchies.

Part IV introduced the 3D Lean pyramid and part V illustrated how to add depth to the matrix - the third dimension that creates alignment with the rest of an organisation to improve its effectiveness.

This part will introduce some more subtle yet rather powerful observations - making 3D Lean an important model to successfully and sustainably support Lean Agile Transformation.

Part IV described the four axes of the matrix which form the four sides of the 3D Lean pyramid: the why, what, whow (what+how) and how axes.

Firstly, it is important to become aware that these four axes are already present within the matrix. However, in more traditional organisations, the 'ground level' where the matrix is to be implemented is usually siloed and mostly only concerned with the what. The disconnect between why and what in these organisations will often detrimentally affect key metrics that distinguish successful companies from others. Any organisational structure based on only one or two of those axes is rather fragile and the organisation might struggle to challenge its competition.

On the other hand, the introduction of why and how through agile and lean have made the matrix a very powerful basis from which the new 3D Lean pyramid can rise to unlock all this uninvested potential. 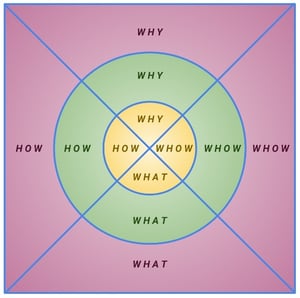 Furthermore, this also implies that there are no hierarchies between those dimensions - the how-amigo is as important as the why-amigo as the what-amigo. The only thing that changes on each level is the scope of those amigos.

Therefore, the 4. observation does also implicitly flatten the organisational hierarchies and thus prevents that the pyramid grows too high and that its walls become too steep creating slippery slopes ;-)

The 4. observation: flatter structures and why, what and how on all levels - total collaboration, pari passu!

5. Observation - Everything is Connected

The 4. observation above demonstrates how all four dimensions work together collaboratively on all levels and how this leads to a reduction of levels. Now, with the four organisational dimensions being the common denominator, the only changing numerator is scope and its dependents like responsibilities; the scope of an amigo narrows when they are closer to the base of the pyramid whilst it is being more holistic at the top of the pyramid. 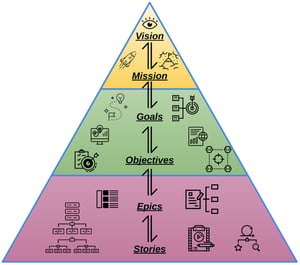 Correlated to scope is the organisational vision pyramid. From the top, vision and mission are guiding an organisation's strategy and tactics. And just like the scope narrows on the way down to the pyramid's base, vision and mission are being translated into tangible goals and objectives and then further refined into epics and stories as they hit the tribes and squads of the fundamental matrix.

Closely related to the OKR model of well-defined objectives and key results, the 5. observation reveals how from vision to story everything is well connected in 3D Lean.

6. Observation - The Matrix of the Golden Circle

Now, vision and mission transcend 3D Lean through goals and objectives, epics and stories, from the top of the pyramid to the matrix at its base (see 5. observation above). However, this also reveals a further, the 6. observation: why, what and how are not only present on each level but they do also transcend 3D Lean from top to bottom - orthogonal to their presence on each level. 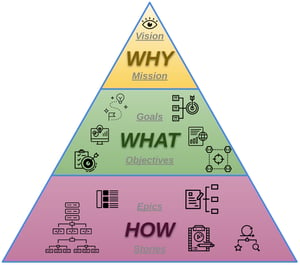 The 6. observation becomes easily visible: Vision and mission provide the organisational why, goals and objectives define the what whilst epics and stories show the how respectively.

Whilst the 4. observation above revealed how all amigos are present on each level yet constrained to their specific scope, this 6. observation demonstrates that why, what and how are not only present on each level but that they do also provide the glue across all levels. They do not only bring meaning to each scope and level but they also keep them well aligned across the pyramid. 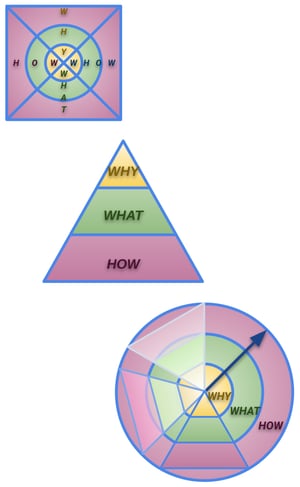 Why, what and how on each level (4. observation) as well as perpendicular across all levels (6. observation) form a new matrix structure across the 3 dimensions of the 3D Lean pyramid - the why-what-how-matrix.

Now, if you look closely, this 6. observation also reveals Simon Sinek's Golden Circle that lay hidden within the 3D Lean pyramid all along. You could say it is the quadrature of the circle or the WhyWhatHow-Matrix of the Golden Circle ;-)

7. Observation - Together We Stand

"Breadth-first targets the global maximum of ROI [...] Whether it's XSCALE XPM, Devops 3rd Way, Google's Design Sprints, or Lean's Set-Based Concurrent Engineering, breadth-first avoids exploring any part of the design space in depth until there's a sketchy view of all of it [...] Business Agility requires Design, Delivery and DevOps to work continuously, hand-in-glove. Self-directing portfolios of self-managing streams of self-organising teams [...] from Products down to Stories."

This excerpt from Peter Merel's 3D Kanban shows how this model and 3D Lean are well aligned and have many similarities: 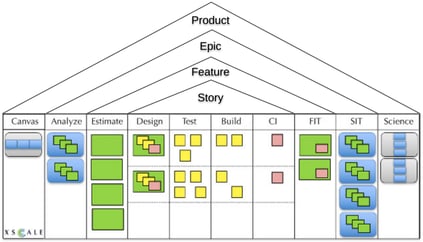 And with a little imagination, the 3D Kanban model even looks very much like a pyramid, too :-)

However, XSCALE is only one example.

The final and 7. observation is that 3D Lean does not stand alone. It is well aligned with other concepts and models such as Lean, DevOps and XSCALE and others.

The last article of this series will wrap up this series, highlight its major findings and connect 3D Lean with other tools, concepts and models to support any organisation in finding their own awesome.

Managing the shift to Apple as we adopt remote working