Live or Die – can incumbents learn to innovate?

Speaking to over fifty companies both in Europe and in the USA, the conclusions of our most recent research have made for sobering reading. Over the last decade the large majority of S&P500 and FTSE100 companies have averaged less than 5% annual growth in revenues. Much of the current growth is being achieved by large scale consolidation rather than new revenue generation. At the same time, digital natives such as Google, Amazon, Alibaba and Tencent have achieved impressive double-digit figures, often as high as 50%.

In this context we set up a research group in 2019 on either side of the Atlantic to meet with CEOs, CIOs and other business leaders to discover if and where genuine innovation was taking place. We asked some simple questions such as what is meant by innovation, where should it take place and what are the barriers that would impede double digital revenue growth. In return we received frank and often troubling responses. Here is a summary of our findings.

What is meant by innovation?

In the words of James Dyson, CEO of Dyson Group, “innovation is about solving problems that others ignore”. Dyson is designing an electric car from scratch and plans to manufacture the vehicle in Singapore. This is a step-out for a UK based company – what we call ‘working at the edge’.

Other companies such as the Walgreen Boots Alliance describe innovation as making critical changes at the ‘core’ of today’s business such as offering online delivery of pharmaceutical products (where only 1% fall into this category today in the UK). Such innovations are all about improving customer convenience.

Most companies included in our survey are implementing digital transformation programmes within the existing business. These are designed to increase efficiency and improve quality. Our view is that such programmes, although entirely worthy, are little more than an attempt to sustain the living dead. In the face of competition from the digital natives, we suspect that most will continue to experience a slow decline in revenue leading to a predictable long-term demise. Just look at IBM.

Genuine innovation is about creating the ‘New’ rather than refining or even transforming the ‘Old’.

Where should innovation take place?

Well run incumbent organisations have grown up during a century of stable, predictable market growth. By adopting linear five-year strategies and employing a philosophy of ‘operational excellence’, such companies have enjoyed strong profitability and dividend growth. Their leaders have focused on exploiting globalisation and IT to operate at scale. Rich rewards have been earned by minimising risks and avoiding failure.

This is in sharp contrast to conditions in the twenty first century where we compete now in a VUCA (volatile, unpredictable, complex and ambiguous) world. Strategy is no longer about formulating a predictable ‘five-year plan’. It is more about creating a vision that can flex as conditions change rapidly. With the advent of digital natives who adopt business models that suits the VUCA environment, many incumbents see an inevitable decline in their core businesses. If they are to sustain earnings and market value, they need to start emulating the newcomers. This is about building new businesses that can exploit a torrent of emerging technologies such as IoT, AI, 5G, 3D printing and Blockchain.

Here is a likely scenario for an incumbent whose core business is based on operational excellence – designed for a foregone era: 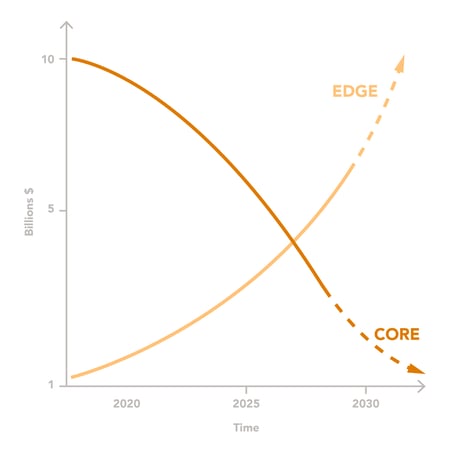 Any realistic chance of long term survival will call for genuine innovation out at the edge to compensate for decline in core revenues and values.

How should genuine innovation be enacted?

Our main learning during the survey was that genuine innovation needs to be separated from the ‘core’ business. It is about taking big, long term risks that would never be accepted by today’s business unit managers. This implies activity at Group level to build tomorrow’s Unicorns. Such activities may be characterised by:

Although such approaches appear radical, several organisations are now ready to back this approach such as Philip Morris International (PMI) who is exiting tobacco products; Dyson and a new product line of Electric Cars; Philips and its entry into digital healthcare; AXA NEXT and concerted defensive of its financial services business. In every case, these firms have appointed CEOs to lead ‘edge’ initiatives, and organised governance to accept multiple failures as well as big wins (as per a venture fund).


What could impede genuine innovation? What are the stark choices for business leaders? Find out in the full article available in our app exclusively for CIONET members and join the conversation!

This article was written by Roger Camrass, director of CIONET UK and a visiting professor of the University of Surrey.